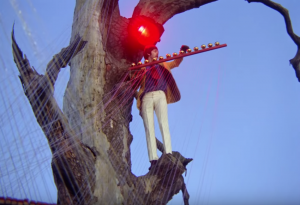 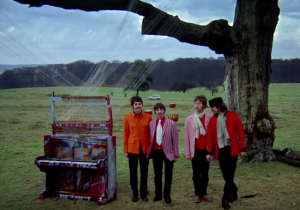 The tree is the main topic of conversation for a very good reason. In fact, for two reasons: [1] the tree was the main prop for the video of the ‘Strawberry Fields Forever’ song by The Beatles in 1967 and [2] Beatles’ fans are constantly questioning whether or not the tree still exists, some 50 years later. Finding the tree has become something of a treasure hunt, which has lasted for decades. Perhaps it’s a contender for the ‘fifth Beatle’ status?

Right, let’s put a Sherlock Holmes deerstalker hat on (metaphorically speaking), and go all-detective. Talk about this tree and the link with the Fab Four, and see what conclusions we can come to. If possible… 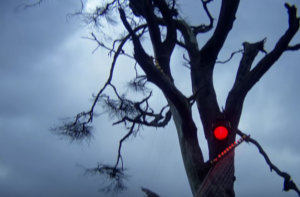 ‘Strawberry Fields Forever’ stands as one of the greatest hits by the Fab Four. Written by John Lennon, and also credited to Paul McCartney, the song broke new ground in the psychedelic genre and it was also widely considered as setting a new standard in music videos. Lennon wrote the song based on his childhood when he used to play in the garden of a children’s home in Liverpool, not far from where he lived. The home was called Strawberry Field.

The video is where our Knole Park tree appears on stage, forming the centrepiece for the Fab Four to get up to all sorts-of artistic, colourful and downright strange antics. The Beatles sported a new image for the film with psychedelic clothing and moustaches, and no more ‘mop top’ hairstyles, which had formed a big part of their personal image at the beginning of the band’s touring. In many respects, according to Beatles fans, the new song opened a new direction in the band’s career.

The tree in Knole Park was dressed up with strings or webbing stretched from the branches to a somewhat strange instrument set-up, which looked akin to a combined piano and a harp. Filming was very original, surreal even… with ethereal lighting, close-ups on the band’s faces, and rather abstract moments such as the Fab Four walking backwards, pouring paint onto the piano (if that’s the right description of it) and Paul McCartney seemingly jumping from the ground onto a branch of the now-famous tree. 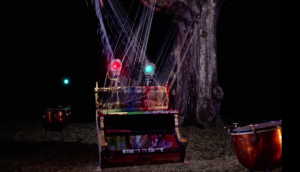 Now – detective work. Debate rages on online forums about where the tree is today. The Great Storm of 1987, when Knole Park lost many trees, hasn’t helped Beatlemania detectives. The problem as well is that the shape of tree is likely to have changed too in the 50 years since the video was made. Rumour has it that the tree is still evident near the entrance of Knole House but an opposing view says that it was lost in the 1987 storm alongside other trees near hole 7 of a golf course. Former pupils from Sevenoaks School, who saw the video being made the time (as eager-eyed schoolboys), especially have interesting eyewitness accounts of the tree and its possible whereabouts in the present day.

Conclusion: we just don’t know. Not for sure. Yes, we can take a snap of this and that tree, and say, ‘Well, it was this one’. But how you can 100 per cent guarantee the fact? After all, despite the 1987 storm, Knole Park has a fair number of trees.

What do you think? Do you know where the Strawberry Fields tree is definitely located? If you do, send photographs of the tree today to *James the Sweep: info@jamesthesweep.co.uk